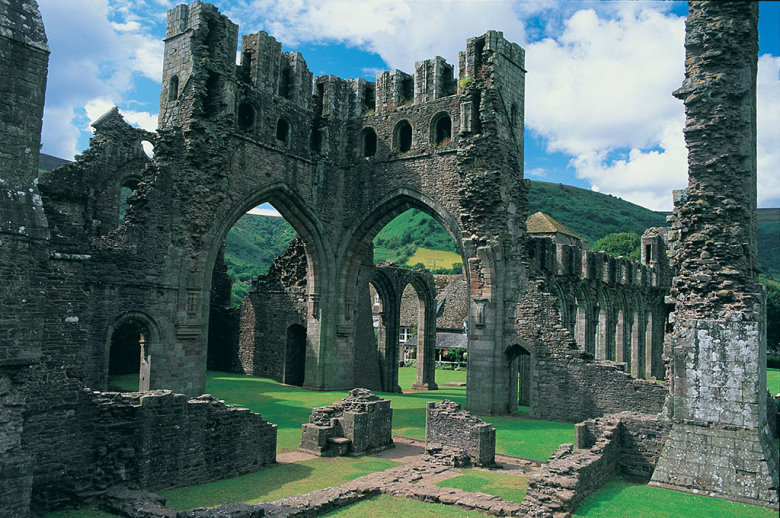 Llanthony Priory is reputed as being one of the earliest houses of Augustinian Canons to have been founded in Britain. Located in the Vale of Ewyas, within the Black Mountains, it has both a wild and beautiful setting. Ironically, the remote location of Llanthony Priory rendered it open to attack from what Gerald of Wales termed ‘barbarous people’.

The origins of the Priory are attributed to William de Lacy (a knight in the service of Hugh de Lacy), who allegedly sheltered in a Chapel dedicated to St David. Soon, a church was established, which was dedicated to John the Baptist and it became recognized as a Priory around 1120. Around that time, Hugh de Lacy endowed the Priory with land and it became famous fairly quickly not least because it enjoyed royal patronage and was visited by many important people of that time.

The size of the Priory grew quickly and soon some 40 Canons were in residence. Trouble brewed and around 1135, the local ‘barbarous people’ forced the inhabitants to leave the Priory and head for the safety of Hereford and Gloucester.

Peace resumed fairly quickly, fortunately, and with the continued support of the family of Hugh de Lacy, the Canons returned and the Priory began to be rebuilt. The remains that stand today are those that were built around this time. Around 1200, the Priory's Church was built and at that time was considered to be one of the greatest buildings in Wales. The Church was laid down in the usual cruciform manner and was accompanied by a large crossing tower with two small towers at the west end.

It is reasonable to assume that given the size and remaining details of the Church that the builders were both wealthy and sophisticated. It is sad to note that up to the eighteenth century the east and west window tracery still stood. Indeed it is said that in 1803 Sir Richard Colt Hoare was present when the great west window collapsed.

The west and south side of the crossing tower still survive though originally they had one more level on top. Of interest, is recent evidence that suggests the Church tower once housed a ‘clock’ in the 14th century. It should be noted that this clock would have been primitive in design and without any face but rather having a bell that was struck upon the hour.

After the great rebuilding of around 1200, the Priory suffered a steady decline of its fortunes and over time the Canons and monks gradually left for Gloucester. The decline was accelerated during the rebellion of Owen Glyndwr and his followers during the beginning of the 15th century. The records indicate that by 1504 the Priory had but four Canons living there. Matters were finalized when Henry VIII purged the Priory as part of his act of dissolution. Apparently, the Priory and its lands were sold for the sum of £160 and left to rot.