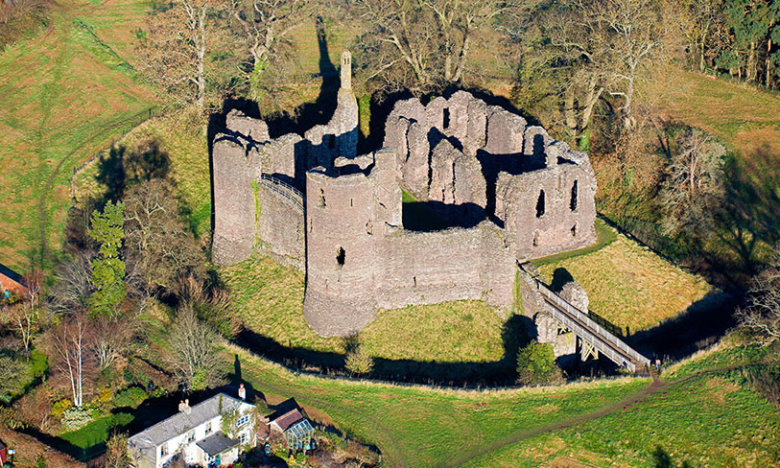 The ruined castle of Grosmont can be found in Monmouthshire, Wales, close to the border with Herefordshire in England. It is located near the river Monmow and was built in the 13th century by Hubert de Burgh on earlier Norman foundations that consisted of a wooden motte and bailey castle. This earlier castle is attributed to William FitzOsbern who was Earl of Hereford immediately after the Norman conquest of England. Earl William is recorded as having been killed in 1071. This led to his son Roger being forced from the family lands in 1075. The castle came into the possession of the Marcher Lord Pain fitzJohn during the reign of King Henry I (1100–35). Records are unclear if the castle was of timber or stone construction in the 12th century.

The records indicate that in 1201 King John granted the lordship of three castles, including Grosmont, to Hubert de Burgh. This privilege was withdrawn after Hubert was captured and imprisoned in France in 1205. Following the death of King John, Hubert de Burgh regained his castles in the Welsh Marches in 1219. It was Hubert who was responsible for turning the administrative castle of Grosmont into a fortress. The records show that Hubert was undertaking building work at Grosmont between 1224 and 1226. This work included the construction of the Castle using the local ‘old red’ sandstone that still gives Grosmont its distinctive appearance today. Some of the buildings constructed during this period still exist, others do not. The gatehouse, for instance has mostly disappeared in the last 100 years.

It was in 1233 that the castle witnessed the rout of the army of Henry III by a combined rebel force of English and Welsh soldiers led by the third Earl of Pembroke. Amongst the rebel force was one Hubert de Burgh, who was granted back Grosmont castle for his efforts and held it afterwards until 1239. In 1267 King Henry III granted the castle to his second son, Edmund Crouchback, whose son, Henry of Grosmont, was born in the castle in 1310. It is understood that shortly after this date, the castle was converted into a household suitable for nobility. The conversion work included one of the D-shaped towers being demolished to allow accommodation to be built over it. Further changes were made to the height and size the south-west tower, which was turned into a five-story keep. Interestingly, as an additional security feature, the entrance to the living quarters of the new keep could only be approached via a wooden stairway to the north. Of particular interest was the building of the tall octagonal chimney for which Grosmont is noted.

During the thirteenth century the importance of Grosmont gradually declined. In March 1405 the castle was attacked by Welsh forces which included Gruffudd, son of Owain Glyndŵr. The English forces eventually prevailed under the leadership of forces led from Hereford by Prince Henry, the future King Henry V, and between 800 and 1,000 Welsh soldiers were killed in the battle.

Grosmont Castle was abandoned by the 16th century, and, with Skenfrith and White Castle, was sold by the Duchy of Lancaster to the Duke of Beaufort in 1825. In 1902 it was again sold, to the landowner and historian Sir Joseph Bradney, before it passed into state ownership in 1923.